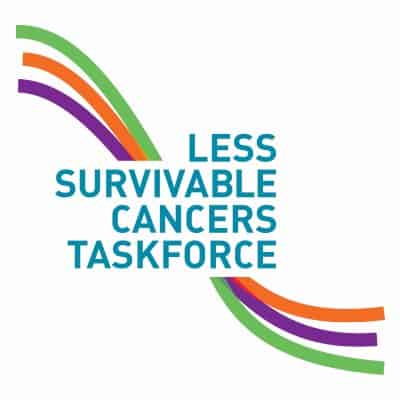 70,000 people are diagnosed with a less survivable cancer (LSC) each year in the UK. Despite making up a quarter of all cancer diagnoses they account for nearly half of all deaths. The five-year survival rate for people with less survivable cancers is just 14%, compared to 64% for other common cancers.

To coincide with the general election, we have launched our manifesto detailing how the next government should act to improving outcomes for the cancer patients facing the poorest prognoses.

The UK urgently needs to do more to support less survivable cancers (LSCs): out of 20 European countries with reliable data for all six less survivable cancers, the UK ranks as the fifth worst in terms of five-year survival rates. Whereas survival has improved in the last 45 years for most cancers, the survival rate for cancers in the pancreas, brain, liver, lung, oesophagus and stomach still languishes behind throughout the UK.

We are calling for the next government to:

1. Prioritise less survivable cancers with a target to double survival rates to 28% over the next 10 years

Successive governments have failed to prioritise and drive improvements in the LSCs meaning patients have been stuck with poor survival figures that were left behind a generation ago by the more survivable cancers.

Only a quarter of LSCs for which we have data are diagnosed at stage 1 or 2 compared to one half of all common cancers. Earlier diagnosis would mean earlier, more effective, treatment.

LSCs received one quarter of the amount of research funding given to other common cancers by the government between 2007-2016, which have a higher rate of survival.

4. Invest in the NHS’s cancer workforce for the long term

Close to 3 in 4 staff in non-surgical oncology services view staff shortages as a barrier to providing efficient cancer treatments.

5. Inform the public about the symptoms of less survivable cancers

For example, two thirds of UK adults say they are unaware of the symptoms of pancreatic cancer. This lack of awareness means many people do not seek help before it is too late.

6. Ensure more patients are given the option of a clinical trial

Clinical trials are vital to find ways to diagnose these cancers earlier and to develop effective new treatments.

You can read our full manifesto here